What Can’t John Glenn Do? 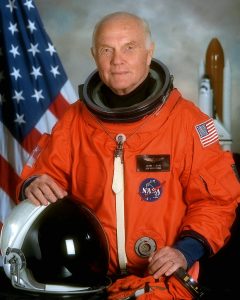 Glenn was born in Cambridge, Ohio in July of 1921. His love for aviation and adventure manifested at a young age – by the time he was a teenager, Glenn was already piloting the skies. Shortly after the attack on Pearl Harbor in 1942, Glenn enlisted in the Naval Aviation Cadet Program. With World War II now in full swing for the United States, Glenn was soon deployed to the Pacific front, where he flew 59 combat missions.

After the sirens of war had quelled in 1945, Glenn made the decision to continue his career as a military pilot, flying 90 more combat missions during the Korean War. By the time the war in Korea came to a close in 1953, Glenn had nearly 150 combat missions under his belt, a plethora of military medals and almost two decades worth of aviation experience – with many more decades to come.

Fast forward to 1957: Glenn set a new transcontinental speed record when he reached supersonic speeds during a flight from Los Angeles to New York (he finished the flight in three hours and 23 minutes). By this time in American history, the seeds of the Cold War had been firmly planted in fertile soil. The federal government was seeking extraordinary men – natural risk takers with a hankering for glory. Americans who could make a name for their country. Glenn was one of those men, and in 1958, his feats from the wild blue yonder caught the attention of a newly formed American agency called NASA. The Space Race was in full effect.

In 1959, Glenn and six other men were handpicked by NASA for the United States’ Space Program. The crew came to be remembered as the Mercury Seven. Glenn was the eldest of his peers. It was in 1962 that Glenn sealed his fate as an American legend when he became the first American to orbit the earth, three times in five and a half hours.

“There, spread out as far as I could see were literally thousands of tiny luminous objects that glowed in the black sky like fireflies,” Glenn told Life Magazine after his adventure on the New Frontier.

Having conquered both sky and space by age 41, Glenn was ready to pursue a third career – this time, as a U.S. Senator. Yet for Glenn, this career path was littered with obstacles. In 10 years, between 1964 and 1974, Glenn ran for Senate three times, finally winning the election the third time around. Always thirsty for more, Glenn decided to run for President of the United States in 1984. The campaign came to an abrupt halt when he racked up $3 million in campaign debt. In 1998, after serving four terms as an Ohio Senator, Glenn abandoned his political ambitions for an old hobby.

Unable to sit still for too long not long, the then-77 year old Glenn made his triumphant return to NASA to take part in the STS-95 mission launch of 1998. With that launch into orbit nearly 17 years ago, John Glenn set one more record by becoming the oldest person to go to space.